Articles and opinion from the INSTRUMENTAL webzine

The Spirit of Radio: Re-visited or Re-ignited?

More than seventy years have now passed since musicologist and social historian Alan Lomax made his first field recording of American folk song. Between 1934 and 1936 he and his father, the noted folklorist John Avery Lomax, recorded thousands of spontaneous performances from every corner of North America and the Afro-Carribean communities of Haiti and The Bahamas. They used equipment which was at that time state-of-the-art. The used a single microphone to record songs of the common folk straight onto a lacquer-coated aluminium disc onto a Presto portable recorder. This innovation, large and unwieldy by today’s standards, was introduced in 1934 and by 1936 it was being used extensively by the NBC and CBS radio networks for their recorded output.

The result of the Lomax initiative, and those of subsequent recording expeditions, is a massive archive of priceless musical treasures and a matchless historical record of the birth and evolution of popular music. Lomax used the best available recording tools at every opportunity and he did not hesitate to upgrade to tape and film to make field recordings. However, it those early lacquer discs that remain iconic and emblematic as the source code for contemporary popular music.

Alan Lomax went on to study for a degree in philosophy at the University of Texas and conducted many of his later field trips with his wife Elizabeth. He was an academic and an aesthete whose skill and dedication were quickly recognised with his appointment to Assistant in Charge of  The Archive of American Folk Song. He collated and curated his life’s work for the benefit of all, and those records are rightly homed, housed and protected in the institutions of government and the vaults of academia. The whole world now enjoys free access to the archive since its digitization and subsequent availability online at Cultural Equity.

The 78 Project emulates the methodology of those early 1930’s field recordings to re-visit the spirit of Lomax’s original enterprise. He once said, “The main point of my activity is to put sound technology at the disposal of The Folk, to bring channels of communication to all sorts of artists and areas”. Today, artists are more than capable of finding the technology themselves and they can make recordings on devices that fit comfortably into a coat pocket. So why bother to carry a museum piece weighing in excess of 130 pounds (58 kilos) from place to place to record music that could just as easily be captured instantaneously on a hand-held digital recorder?

Well, the 78 Project is offering something rare and wonderful. It’s the chance to bring a song alive as if heard for the first time; essential, electric and in the moment. It’s the most fundamental tenet of performance – one singer, one song and one take. The proposition is the brainchild of film maker Alex Steyermark and writer/producer/ performer Lavinia Jones-Wright. It is a musical and historical adventure, a film documentary and a re-creation of on of the earliest chapters in the history of recorded song. They are taking a Presto recorder out into the field once more to record established performers and breakthrough artists as they re-define some striking tunes old and new alike.

This might seem at first glance to be a bit of an indulgent wheeze at a time when everyone is caught in the dazzling beam of light emanating from the iclouds overhead. But look down and regard what they are doing more closely and you will see that they are not merely constructing reproduction furniture. These new/old field recordings are a freshly observed witness to the creative spark. The artists involved and the songs they perform appear like suddenly found objects, stumbled upon, held up to the light and revealing patterns of refracted colours that seem to be both peculiar and familiar. 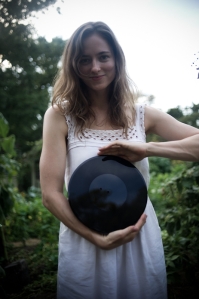 Every new incarnation of recording technology has altered the human voice further and distanced he listener farther still from the original performance. Contemporary listening experiences are characterized by a shimmering sheen of clean sound that is cut and polished by the diamond edge of digitization. The distance between the Presto and the iPad is planetary in proportion but close enough, in principle, for rock ‘n’ roll. Imagine the stylus cutting into the lacquer as the disc revolves and song spins out and then consider the burn to disc icon on your computer screen.

Songs are sung in a single space in time but recordings are etched in the memory. Similarly, you can have as many attempts as you like to get your fresh tracks down. The computer will even correct you if you are hung over or if you’re pretty but you really can’t sing. Little wonder then that the immediacy of live performance remains to this day a sharp and bitter acid test of true ability.

This is what the 78 Project is delivering back to us. It’s making us remember the essence of popular song. It begins with the storyteller’s gift amplified through song and his or her act of standing up and filling the room with soul and wit and art.

So far more than a dozen recordings have been made with artist such as Justin Townes Earle, Richard Thompson, Roseanne Cash, Marshall Crenshaw, Amy La Vere, The Mynabirds and Vandaveer. However, the producers seem to be gathered up in the momentum of the enterprise, and one recording date seems to lead inevitably and naturally to others. It may be a project that never really ends because it is a constant programme of capitalizing on any opportunity to capture in an eye-blink the truly human voice.

Is that how it happened before with Alan Lomax? Did he record some farm hand as he sang for him the most spine tingling field song, only to be told afterwards that this was nothing. He should hear the man’s father singing. Now that is a voice from God.

The Spirit of Radio and the Art of Recording go hand in glove. What we seek from radio is the vitality of the moment and what we  hope for in a recording is a keepsake of that ephemeral experience. Many, many contemporary artists, it seems, are seeking out the singular thing that gives their music enduring life. Some call it analogue, others call it valve sound. But everyone is reassuringly keen to ensure that the humanity prevails in the new cycle of popular song of the digital era.

This summer the 78 Project hits the road to continue the recording series in cities across the U.S. including, Memphis, Nashville, Louisville, Philadelphia, Austin, Chicago, and Los Angeles among many others.  It will be present at music and film festival such as Philadelphia Folk Festival 17-18 August, All Tomorrow’s Parties in Asbury Park 9-23 September, and DOC NYC 8-15 November. There they will demonstrate the recording technique for live audiences and screen the project videos. More importantly, the musical journey continues into (as yet) undiscovered country where the unpredictable is the only thing that can be expected.

videos by MusicFog and The 78Project

Images: public domain and courtesy of The 78 Project